PLEXTALK Pocket is my constant companion …. when I travel to work, when I am cooking, when I go to sleep …. because then, I am listening to my beloved books!

As with my iPad, I have not investigated all that my PLEXTALK Pocket is capable of – I am just too busy listening to my books 🙂 The main reason for acquiring one was to replace my old Victor Reader Classic that had also been my faithful companion for many years. However, as I used it via the main electricity supply, not as easy to transport as the PLEXTALK Pocket.

Stargardts Net is now using a new WordPress theme that should work on desktop as well as mobile devices. You will notice that it is not a drastic design change but a change nonetheless. I have received notes from Google telling me that the old format did not meet up to their very strict criteria … so changes were needed. The theme does not work exactly as I would like … but, on the whole, pretty good.
Many of us using Stargardts Net probably have the disease and so have very limited vision and thus we are not so keen on using mobile devices (or if we do, have to use all the accessibility/magnification tools available). I think Google does not take into account the subject and main user group of websites but that they should be adapted for mobile devices no matter what.
Anyway, I would be very grateful for comments/feedback on the new look and feel of Stargardts Net 🙂

I guess it depends on what country you live in as to what vision aids are offered/available or within your price range. I have lived in England and Canada and now live in Sweden and have always been offered great vision aids that work well for me. In all of these countries, I was able to have the adaptive equipment on long loan, returning them when they were no longer of use for me, or replacing them with modern alternatives. As my vision has deteriorated through the years, I have had to try new devices. At first I could easily read text with a loupe but now I need a CCTV. No two of us have the same visual acuity so, of course, one has to try out the device(s) that could help with just your acuity/needs.

Maybe a good start would be to read the Guide to Buying Low Vision Magnifiers and What are Low Vision Optical Devices.

Loupes
A good selection of these can be seen via Magnifying Aids as well as many other options.

Other hand-held magnifiers/vision aids
One that I now have is the i-loview 7 HD which is a nifty device I can have in my pocket/handbag. The i-loview 7 HD is a high definition video magnifier that has a 7 inch screen which can be used for both close up and distance viewing too. For example, if I cannot read a street sign, I can take a photo of it and then zoom up to a size that I can read … great for anything that is hard for me to see, e.g. bus numbers and any type of signage. See a demonstration video on You Tube. I also use my iPad in the same way, take a photo and zoom in for detail … but my iPad is heavier 🙂

CCTV
I have used a CCTV to read text for many years. Right now, I use one from Low Vision International which I am really happy with. Check out their other great products too.

At work, I have used a desktop CCTV system that goes via my computer that divides the normal computer screen to show one half as your computer work area and one half as the document that you are viewing via the CCTV. See a list of camera units which share a computer’s monitor on via the Texas School for the Blind and Visually Impaired website.

Another piece of adaptive equipment that I acquired recently is the VisioBook. This I can take with me to meetings/courses and read even text on the white board. However, I do find that I have to have such a high magnification that not everything fits on the reading screen therefore I have to move the whole device around to read everything …. a drawback. However, this could be a super choice for those of you who do not need a high magnification. It can even be used when seeing to apply make up!

This information just scrapes the surface of what is available for us with low vision/Stargardts. As I mentioned, after trying out various devices, I am sure you will find a device that suits just your acuity/needs 🙂

I have been a dedicated user of Zoom Text for many, many years. However, my daughter (who also has Stargardts) introduced me to the built in magnifier that comes with Windows … I love it! In fact, on my new computer, I use it more than Zoom Text these days. I am sure most of you have already discovered it. With my new computer that has Windows 8, I have had problems with Zoom Text compatibility with some programs … but the Windows magnifier works with them, no problems.

Read more about how to turn on and adjust Windows magnifier on the Microsoft website.

If you own an iPhone, this is a super new app to have. By activating Be My Eyes to launch a video chat with a sighted helper, you get help in seeing signs, expiry dates on food products, train times/platform numbers, the exit door, navigating new surroundings etc. etc. … we all know of many situations when we mutter to ourselves “if only I could borrow somebody’s eyes” as our own vision fails us. Hans Jørgen Wiberg is the founder of Be My Eyes and you can read more about it on their website.

Here are some helpful links with regard to being visually impaired and using the iPhone and iPad:
– 35 Apps to Help You Get Started with a New iOS Device at AppleVis
– Apple’s accessibility options for iPad regarding vision
– Apps For Blind And Visually Impaired
– ZoomReader for iPhone/iPad
– iPad Accessibility Tip Sheet – District of Columbia Public Library

What “time wasters” (i.e. games!) do you have on your iPad or iPhone that work well if you have Stargardts?
These three word games remain my firm favourites and I find them easy to use:
– Wordfeud
– Ruzzle
– Word Solitaire

I received a note recently from Shane in Ottawa, Canada about the much talked about eSight eyewear:
“My wife and sister in law both have Stargardt’s (they’re now in their 50’s).

I wonder if you’re aware of this new breakthrough high tech device for people with low vision just launched in both Canada and the U.S (in the U.S through Chicago Lighthouse)? Stargardt’s patients, in particular, benefit tremendously from the technology (including those in my family).

In particular, please watch the videos and read the news stories which are inspiring and have received national attention over the past few weeks and months.”

Has anyone else tried eSight eyewear?

I tend not to use my recipe books now due to my inability to see the text but one can find all sorts of recipes on the web. This is a real bonus for us who are visually impaired as we can see the recipe with ease using Zoom Text or other magnification programs. I usually copy the recipe text and paste it into a Word document enlarging the text size to REALLY big 🙂 I saw this little nifty idea on Facebook: By using an everyday skirt/pants hanger to clip the recipe into and hang on a cupboard handle, one avoids back ache if recipe is on the counter and the splatters from ingredients or messy fingers! 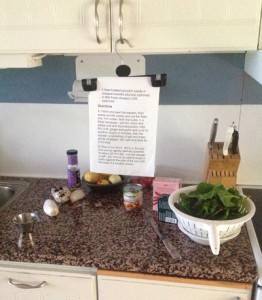 Anyone else care to share other tips and tricks to use when one is a visually impaired cook?

I have just read an article in the national Swedish newspaper that there is going to be fewer and fewer bank machines/ATMs here where one can get cash from one’s bank account. This is due to the fact that Sweden lies ahead of many other countries when it comes to paying by card. As a visually impaired person, this fills me with alarm! I tend to use cash a lot as I find the bank/credit card readers in stores, restaurants etc. too intimidating and hard to use! First, there are so many card reader models and just to find the slot to insert one’s card can be hard! I then try to focus on the number pad to insert my PIN number but, again, models differ in the number of rows of buttons so I am never quite sure if I am hitting the right combination. Text and/or figures obviously then appear in the tiny, little card reader window and then one is expected to press the OK button … but what am I saying OK to?! I cannot see a thing in that little window! So, I dare to press the OK button (once I have found it) and, sometimes, given a small receipt to sign under … again, for me, hard to read so not sure what amount I am signing for let alone find the line where I am supposed to sign! I do not wear glasses and, most people tell me, do not look like I am visually impaired so, on the few occasions when I have asked for assistance or explained about my visual impairment, I notice a sigh of annoyance, a look of disbelief and rarely, service with a smile.

On the other hand, bank machines/ATMs in Sweden (and in other countries although I, once again, tend to take cash with me when going abroad!) are larger in every sense of the word …. larger keypad, larger text on screen, lights to indicate where to insert card, where receipt will appear and where money will emerge! There is also a place where you can insert a set of headphones (if you can find it and just happen to have them with you!) if you want help via verbal prompts. Not all of us who are visually impaired can read braille but I am sure it is welcome by those you can! I often wonder what kind of test group they had for advice when designing new bank machines?

I will now recall a sad little story (for me!): A new model of bank machine was introduced in Sweden in the past year. I had never used it before and not been given a “guided tour” by my kids but decided to be brave and entered my PIN code as usual after choosing that I wanted to withdraw cash. However, the card was ejected from the machine … but no cash. Silly me, I thought, I had somehow accidentally pressed the cancel button. I still had some cash in my wallet so walked away, no other people stodd in the queue. What I did not realise was that the new machines were MUCH slower than the old ones and, in fact, my money had come out after I had left! A nice “bonus” for the person using the bank machine after me 🙁

That ends my grouch for today!

I have temporarily disabled the invitation to comment on each post as the site has been inundated by spammers …. everything from handbags, hockey shirts, designer everything and medications online … today, over 800 of them!!! It takes a while to keep clearing all these spams but I will find a filter that will hopefully get rid of this pest!

Welcome! – We hope to add to the website, and in particular the blog, on a regular basis so be sure to come back soon!